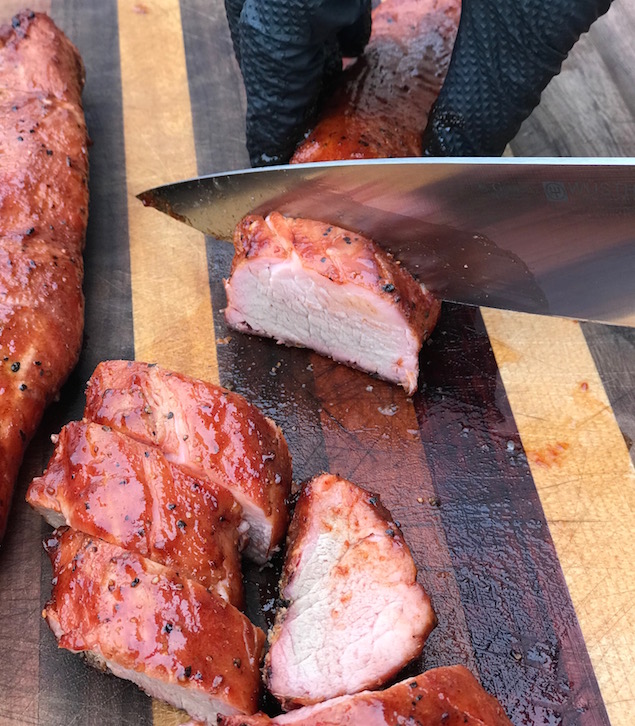 If you haven’t noticed from most of the recipes on my website, I like simple. That means I try to maximize flavor with the fewest ingredients possible (mostly. Every once in a while I like to expand my horizons). Lucky for you, this is another one of those recipes. Pork tenderloin may sound fancy and expensive, but its quite affordable. And this smoked BBQ pork tenderloin will provide you quite the bang for your buck!

Where does the tenderloin come from?

The pork tenderloin is a cut of meat that comes from close by the mid-to-lower spinal area of the animal. While most muscles are used for movement, the tenderloin is used for posture. The tenderloin is considered the most tender part of the pig because this muscle isn’t used as much as the others.

When at the meat department of your local grocery store, don’t be surprised to see pork tenderloins come in a two-pack. It’s quite common. These cuts of pork typically weigh between 3/4 lb. to 1 1/2 lb. each and are relatively cheap, so they put two in the package to make it worth selling.

When taking the tenderloins out of the package, you’ll notice a thin, shiny layer on some areas of the meat. This is what is known as silver skin, which was meant to hold the muscle together while in the pig. Since the pig doesn’t need it anymore, feel free to peel it off. You’ll want to because leaving it on can affect the bite of the tenderloin and the meat’s ability to absorb the seasoning you put on it.

To remove the silver skin, it would be best to use a boning knife. This blade has a little curve to it near the tip as it thins out, making it easier to poke just under the layer of silver skin and push through until it comes out the opposite side of the shiny, filmy stuff. Then you start pushing the sharp side of the blade forward in a gentle, back-and-forth sawing motion until the silver skin is removed. Repeat this with other sections of silver skin until removed. This should only take a few minutes.

Need a visual? Here’s a video of me trimming a pork tenderloin!

Next step is to season the tenderloin with your favorite blend of spices. I don’t like to coat it to heavily, but put on an adequate amount until you get the flavor you want out of the seasoning/rub. That’s it for this step!

Take the smoked pork tenderloin out to your grill/smoker that you have already got up to the 240-250F temperature on indirect heat and place it on there. As far as smoking wood goes, I like apple wood for this one.

With the pork tenderloin being relatively small, it cooks pretty quick. Usually about 45 minutes is all it takes. After 30 minutes of being on the grill, lift the lid and apply some of your favorite BBQ sauce and honey on the tenderloin with a basting brush.

Close the lid and come back in about 15 minutes.

When is it done?

Using a digital meat thermometer, such as the Thermapen Mk4 from Thermoworks, insert the probe in the middle of the thickest portion of the tenderloin to gauge when it’s done. The reason for this is to make sure it doesn’t undercook and you don’t get yourself sick. Look for a finishing temp of 145F.

Why 145F? Isn’t that undercooked? Have you been taught that 165F is when pork is done? If you’re like me, then you’ve been taught this same thing for most of your life. This rings true for ground pork, but for most other cuts, such as pork steaks, chops, roasts, and even tenderloins, the USDA recommends a minimum of 145F, which is good for a medium finish. This keeps the meat juicy and from drying out at the 165F temps. Since the meat has a little carry over temp, feel free to pull off a couple of degrees lower if you wish.

Now that the smoked pork tenderloin is off the grill and on a cutting board, let it rest about 10 minutes before slicing. Doing so allows it to relax and let the juices start to build inside. After this short wait, start slicing into 1/2″ to 1″ slices. You’ll notice how tender and juicy it is, as well as the sign of a nice smoke ring inside. These are signs that you have done this thing right. Sample one or two (or five) to ensure they are good enough for your family or guests before sharing with them.

When brushing honey and BBQ sauce on pork tenderloin, it isn't necessary to lift the meat off the grill to get the bottom.

Use a digital meat thermometer for a fast, accurate reading.

When checking temps, put probe of thermometer into the center of the thickest portion of the meat to ensure the whole thing will cook through properly.

Hi there! My name is Dan Phelps and I freakin' LOVE barbecue. It's my passion. I do this BBQ thing year round in the snow, rain, or blazing heat. I put care into the recipes I post and am meticulous about the products I review. I feel I've learned a good amount through trial and error and I encourage you to do the same. This is how we grow. Now that we've officially bonded, I look forward to growing on this journey with you!